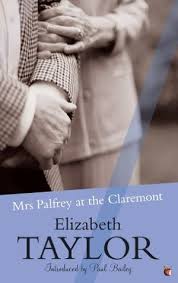 No, not that Elizabeth Taylor, but the feted British novelist of upper/middle class Britain.

I stumbled across a film adaptation of this one day and fell for it. Whilst the film, in a lot of ways was warmer, this novel is a great story about the stoicness of older British people, the ‘keep calm and carry on’ crowd, even when they are alone and living in a hotel.

Mrs Palfrey, avoiding a nursing home and trying to keep some independence, moves into the Claremont hotel in London, alongside a few other elderly residents. A chance meeting with a young man who helps her up after a fall, and a subsequent misunderstanding where the other residents believe he is her grandson (who in reality is uninterested by his grandmother). Beautifully written and quite sad in places, this book isn’t quite as warm as the film adaptation, but in a way that suits it. I’ll certainly be reading more of Taylor’s books.

You can reserve a copy at South Dublin Libraries’ catalogue here.