And here’s the return of our biannual Poetry Roundup in which I talk through my favourites of the 80 collections I have read in the past six months.

Nigh-No-Place is the most recently read of this list and – gasp! – it’s a prizewinner (of the 2008 TS Eliot) that I actually like! Clean, beautifully sculpted lines with a breathtaking use of verbs, I really enjoyed this, and will be looking out for more of her work.

Poetry Chapbooks (if you’re in the US) or Pamphlets (if you’re in the UK) are something I read a lot of. Usually a publication in the run-up to a first collection that is shorter (30-40 pages max, with collections usually starting at 45 pages and up), they can also just be shorter books that people put out. I find they’re great short, sharp shocks of work, particularly when focused around a theme.

Ron Mohring, previous Round-Up Pick (#1), has reissued his chapbook from the 90’s, some of which went on to form Survivable World but some of which didn’t, and is just as good. A beautifully written collection about the loss of a partner and grief (also recommended is its sister publication, The David Museum, published by New Michigan Press, in print for over 15 years!).

Derek Berry is a queer poet from the US and they put out two chapbooks this year, one themselves and one with Bateau Press, which is the one I read: titled Buggery, it doesn’t pull any punches and is a fantastically written, funny and dark exploration of queerness – recommended.

I’ve been buying a good few books from Aaron Kent’s Broken Sleep Books whose aesthetic and poets I really dig – one of my favourites is fellow Irish poet (I mean, how could I not check it out?) Eva Griffin: a remarkably controlled, funny and beautifully drawn pamphlet that shows a remarkably assured voice from this young poet.

Finally, for chapbooks, I came across an oldie which I absolutely adored – Caroline Lynch’s Lost in the Gaeltacht, from Salmon Poetry, her only book so far (unfortunately!). Beautifully written and very engaging, I’d love to read more from her!

So, since I’m introducing new terminology with chapbooks and pamphlets, there’s also what are often called Chaplets, which are even shorter collections usually 5-7 poems, in a little booklet. Think like a little A5 zine. I read two great ones recently. Bad Betty Press do a series called Bad Betty Shots, which are short chaplets by women and non-binary people and Katie Metcalfe’s The Pale Fox was a weird, engaging read that was gorgeously written. Secondly, Gustavo Hernandez – a poet to watch – has put out his first publication, a chaplet called Form His Arms, nine stunning poems that demand to be read and re-read. Put out by Ghost City Press as part of their 2020 Summer Series, it’s available to download, for free, here.

And next, more prize-winners I actually liked. Will Harris’ RENDANG was the 2020 Spring Choice for the Poetry Book Society and this dense, insistent book is such a must-read that I read it straight-through twice. Another debut, Laura Scott’s So Many Rooms has just won the 2020 Seamus Heaney Prize for a First Collection and honestly, it’s well-deserved: a beautifully hewn book about love and literature.

Dedalus is an Irish press that puts out consistently strong work. Two collections of theirs I really enjoyed were Catherine MacCarthy’s Daughters of the House and Katherine Duffy’s Sorrow’s Egg: both of these books, and Dedalus in general, have such a direct clarity – getting right to the root of the image in crisp, elegant description – that really appeals to me.

Caroline Bird’s In These Days of Prohibition is my absolute favourite of the three or four books of hers I’ve read so far: propelled by the through line of a long-term relationship falling apart, the language that grated in The Hat-Stand Union is pared back, and as a result, allowed to bloom in tandem with the form and theme. A stunner.

Finally, I ordered The Dark of the Sun: Selected Poems by Umberto Saba on a whim – he was on a list of queer poets, and I hadn’t heard of him, and I adored this. A masterful collection (and selection) of his work that might be hard to come by, but well worth tracking down. 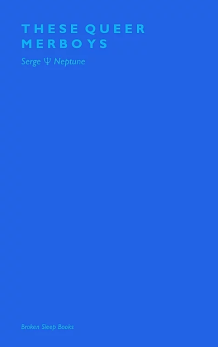 And so, to the top three.

Adam Wyeth’s second collection, The Art of Dying floored me. It was honestly just so perfect. The flow, the individual poems, the range of topics covered. A wonderfully controlled, yet irreverent, book –  his poem Anatidaephobia is based around the fear that one is being constantly watched by a duck! Check him out reading it for the Irish Poetry Reading Archive here. Highly Recommended

Serge ♆ Neptune’s (yes, there’s a trident in the middle of his name!) debut pamphlet, These Queer Merboys was, simply put, brilliant. A short, controlled book where each poem is a stunner that compares themes of queerness in the metaphor of Mermen, this chapbook is absolutely not to be missed. I normally only include a poem for the Roundup Pick, but considering that poet is dead, I’m going to include a poem of Serge’s too.

When right after sunset darkness landed on our living room
like a butterfly on an open flower,
mother didn’t bother to switch on the lights
and kept watching the telly, laid on our sofa.
The telly blasting SINNERS! SINNERS!
While standing by the threshold to the kitchen,
I announced – my voice all jelly – I am a merman now!
and mother looked at me for a second, nodded
and tucked her lips again into a blanket of silence.
The morning after I found a leaflet next to my pillow,
whose content I could not decipher, with pictures as bright
as sun-filled bubbles of righteousness. Mother said
if I wanted to learn how to swim, they’d pay for lessons.
Dad in the car vexed me with lectures about being
only thirteen and knowing nothing, being full of nothing.
You shall not lie with a creature of the sea, for they have no soul
and only by marrying a creature of land, may they acquire one
a statement from mother, scriptures I believe, hugely misquoted.
I started taking baths before sleep and went to bed so wet I’d soak the sheets.
Then started sleeping in the bathtub all night.
I joined my legs tight with an elastic band,
enjoyed every cramp, every cold shiver.
The next day screams and thumps out of the bathroom door
woke me up, as I delayed everyone’s morning routine.
Over breakfast, mother insisted, once more, I was clueless.
I said I’d found a new god, one more gentle and tender,
one that allowed for slipperiness, for mellowness
Mother shook her head, dad shouted to go to my room, called me an abomination.
I soon refused to eat their food, asked mother to cook seaweeds
She tried to feed me steamed spinach instead, but I could tell the difference.
In the end they decided to leave me alone, a shadow sewing
button-eyes on ghost dolls. No one took a bath in the evening.
They started noticing less and less my presence lurking in the back.
Once, they watched a stand-up show on the telly, had their chests
shake with so much laughter, they couldn’t hear a thing.
Once the water in my bathtub was all cherry, I tried to stop
the flower of my wrists from blossoming.

And now, the roundup pick: Fernando Pessoa’s A Little Larger Than the Entire Universe: Selected Poems.

This book. I loved this book. I inhaled it. I internalised it. The breadth and depth of Pessoa’s poet craft is simply stunning, and it is recognised the world over: there’s a running joke –

The reason for this is he wrote under different names, but not names, he called them “heteronyms”, alter egos with their own points of view and complete lives. He fully published them for years and people didn’t realise that so many of the poets they lauded were all in fact Pessoa. And this collection just collects his three main heteronymns, sheep herder and religiously-inclined Alberto Caeiro, physician and classicist Ricardo Reis, the stoic nihilist, and Álvaro de Campos, bisexual traveller, politically and socially concerned, and a staunch critic of one Fernando Pessoa (a selection of whose poems, under his own name, are also included here).

And the poems, are stunning. He has truly created fully-rounded poets with their own evolving styles and lives, and he did so with great overlap (writing most at the same time). And these were only his three most successful heteronyms, he had around 80, although the three above were the most fleshed out.

And the poems – I can tend to blanche at lyrical poetry, which done wrong (as it often can be) can just be lazy, but Pessoa has elevated it to a high art. Masterfully translated, capturing all of Pessoa’s wit, craft and soul, by Richard Zenith, this collection is absolutely essential.

For a poem, I had a hard time picking just one but here’s a favourite –
Alberto Caeiro’s The Keeper of Sheep, section 49:

I go inside and shut the window.
The lamp is brought and I’m told good night.
And my voice contentedly says good night.
May this be my life, now and always:
The day bright with sunshine, or gentle with rain,
Or stormy as if the world were ending,
The evening gentle and my eyes attentive
To the people passing by my window,
With my last friendly gaze going to the peaceful trees,
And then, window shut and the lamp lit,
Without reading or sleeping and thinking of nothing,
To feel life flowing through me like a river between its banks,
And outside a great silence like a god who is sleeping.

So that’s it for another six months! I’ll be back in January 2021 with more recommendations!