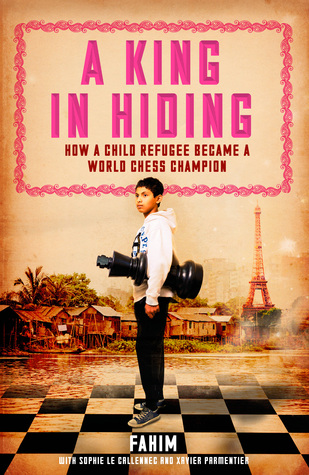 This is a true account of a boy called Fahim from Pakistan who has a talent for chess. He played in his father’s chess club until threats began to be made against himself and his family and Fahim was at risk of being kidnapped. Fahim and his father fled Pakistan and tried to get to Spain, on the way they passed through France and found a chess club with a world class chess coach Xavier Parmentier who saw huge potential in Fahim. They decided to stay in Paris and applied for asylum in France. In the meantime Fahim played in the chess club and finally went on to win the World under 13 Student Chess Championship. The book follows the ups and downs- a lot of downs- in Fahim’s daily life while they wait for the verdict on their asylum applications. Both he and his father make huge sacrifices so that Fahim can play and compete in chess and live in terrible poverty, sometimes camping out in parks during winter, not having enough to eat. They also are fortunate in that people they meet do as much as possible to help them in their asylum applications, finding places for them to stay, providing free chess lessons. This story provides an insight into the reality of what it’s like to be a refugee and at its heart is about the determination of both Fahim and his father and the will to succeed, overcoming a seemingly impossible situation to achieve their dreams.