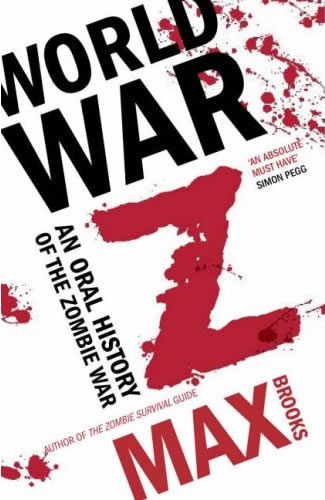 And I did, it was terrific.  The attention to detail and the vivid imagination of the author oozed from the pages.

The book is set ten years after the outbreak of the zombie apocalypse, mankind has all but won, but at a dreadful cost.  The narrator is an agent of the UN Post-War Commission as he travels all over the world to find out definitively what happened in the different countries. The extreme sometimes medieval measures some countries took, while other nations used modern warfare tactics to no avail against the hundreds of millions of Z’s.   Tales of Napoleonic tactics to defeat the hordes of Z’s capture the imagination.

Ten years on and still nobody has heard from North Korea, Major cities lie abandoned and there are Nuclear wastelands.  Zombies still roam the ocean floors and wastelands, they are frozen in the tundra and trapped in buildings in the cities.

Give it a shot, it’s really cleverly done and very easy to read, you won’t regret it.  The Audiobook is especially good, the array of famous actors cast as the various characters will surprise you, and is testament to how good it is,  Alan Alda, Mark Hamill, Common, Jurgen Prochnow, Henry Rollins, Jeri Ryan, Simon Pegg and Paul Sorvino to name but a few will make any car journey fly by, but be sure to get the unabridged version for all the juicy interesting bits.